The Eta Alpha Lambda Chapter of Alpha Phi Alpha Fraternity, Inc., held a candle-lit vigil Thursday evening to mourn the deaths of the black Americans who have died at the hands of police.

Please see the article from the New Haven Independent down below. 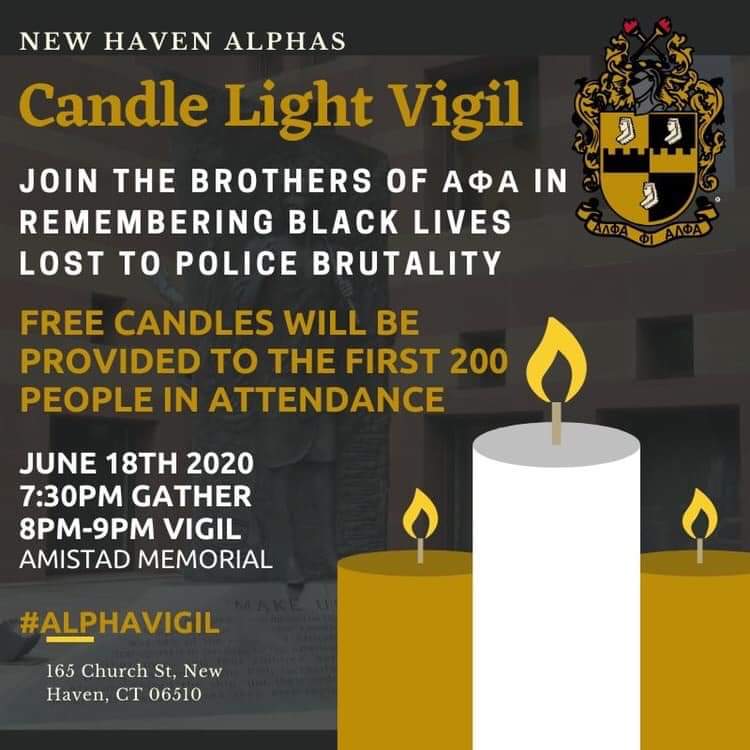 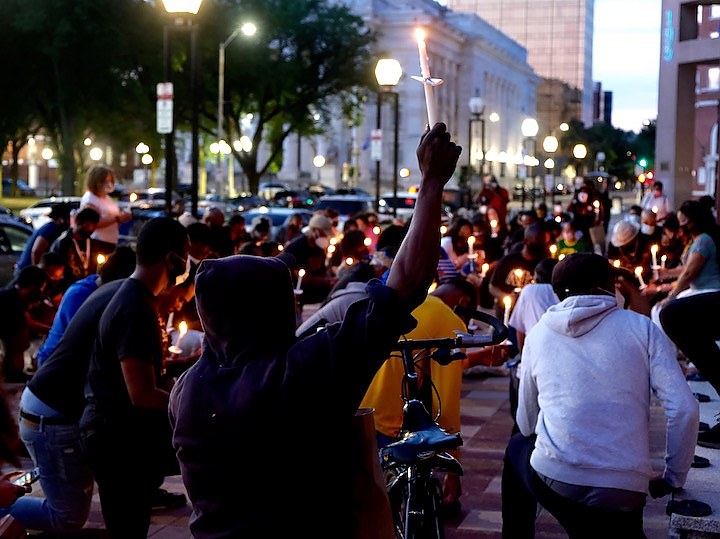 One by one, a man stepped up to the podium set in front of the Amistad memorial before New Haven City Hall and read the name of another black American killed by police.

Once they had spoken the name, the brothers of Alpha Phi Alpha leaned the candle each one was holding to ignite it on the lighter Ty Jenkins (pictured above, right) held out to them.

The Eta Alpha Lambda Chapter of Alpha Phi Alpha Fraternity, Inc., had invited its brothers, and the brothers and sisters of other fraternities and sororities in the New Haven area, to a candle-lit vigil Thursday evening to mourn the deaths of the black Americans who have died at the hands of police.

After a few speeches and a prayer, the brothers had lined up with unlit candles to read a list of names the fraternity had put together.

But there were not enough brothers to read all the names. Montrell Seay (pictured above) was the last to light his candle, and he stayed at the podium for a few minutes reading name after name.

Nine-year-old Grant Bivens was the next to speak. He had learned about Martin Luther King, Jr. in school, he said. “When I first learned about him, I thought ‘Good, I won’t have to suffer from racism.’ That’s not true,” he said.

Though the Alphas had organized the event, they invited the members of other area fraternities and sororities. About 100 people showed up for the twilight vigil on the eve of Juneteenth.

“We’re here to shine a light on the individuals whose breaths can no longer be breathed and whose hearts can no longer beat,” said Sean Mosley, president of the Eta Alpha Lambda chapter of the Alphas, which is the New Haven-based chapter of the national fraternity. “I salute our brothers and sisters,” he continued, as the bell in the clock tower above him rang out eight o’clock, “who have rang the bells of discord and protest over the last month.”

After the brothers had lit their candles, and had carried the flames to those gathered on the sidewalk and lit their candles as well, everyone knelt in silence for eight minutes and 46 seconds. The wind snuffed out a few candles. Neighbors leaned their flames over to the now smoking, dark wicks to reignite them.

The light was fading quickly, and by the time Jenkins broke the silence with a simple “thank you,” the candles seemed brighter than they had eight minutes and 46 seconds before.

They sang “Lift Every Voice and Sing.”

“My grandfather made me learn it before I left the house,” said Jenkins. He waited for the bells above him to toll 9 p.m., and then led the crowd in reciting the poem “Invictus.”

Yves Salomon (pictured) wore a white shirt, and the light of his candle glowed off his chest, framed above by a camouflage-patterned mask.

Salomon is the president of the Organization of New England Chapters of Alpha Phi Alpha. He too had given a speech at the beginning of the evening.

Nothing has brought together such a strong movement in the past, he said, and asked: “How does that hope manifest itself into change?” He repeated the question.

“The real change starts here, right here at home in our communities,” he said. “We don’t have to just look to Washington to change our day-to-day lives. We have the power to effect change locally, through grassroots organizing and participation in our local elections. Point blank, folks, we have to care about who our aldermen are, who our police chiefs and commissioners are, and definitely who our mayors and district attorneys are.”

President of the Greater New Haven Branch of the NAACP also spoke at this event. See images below. 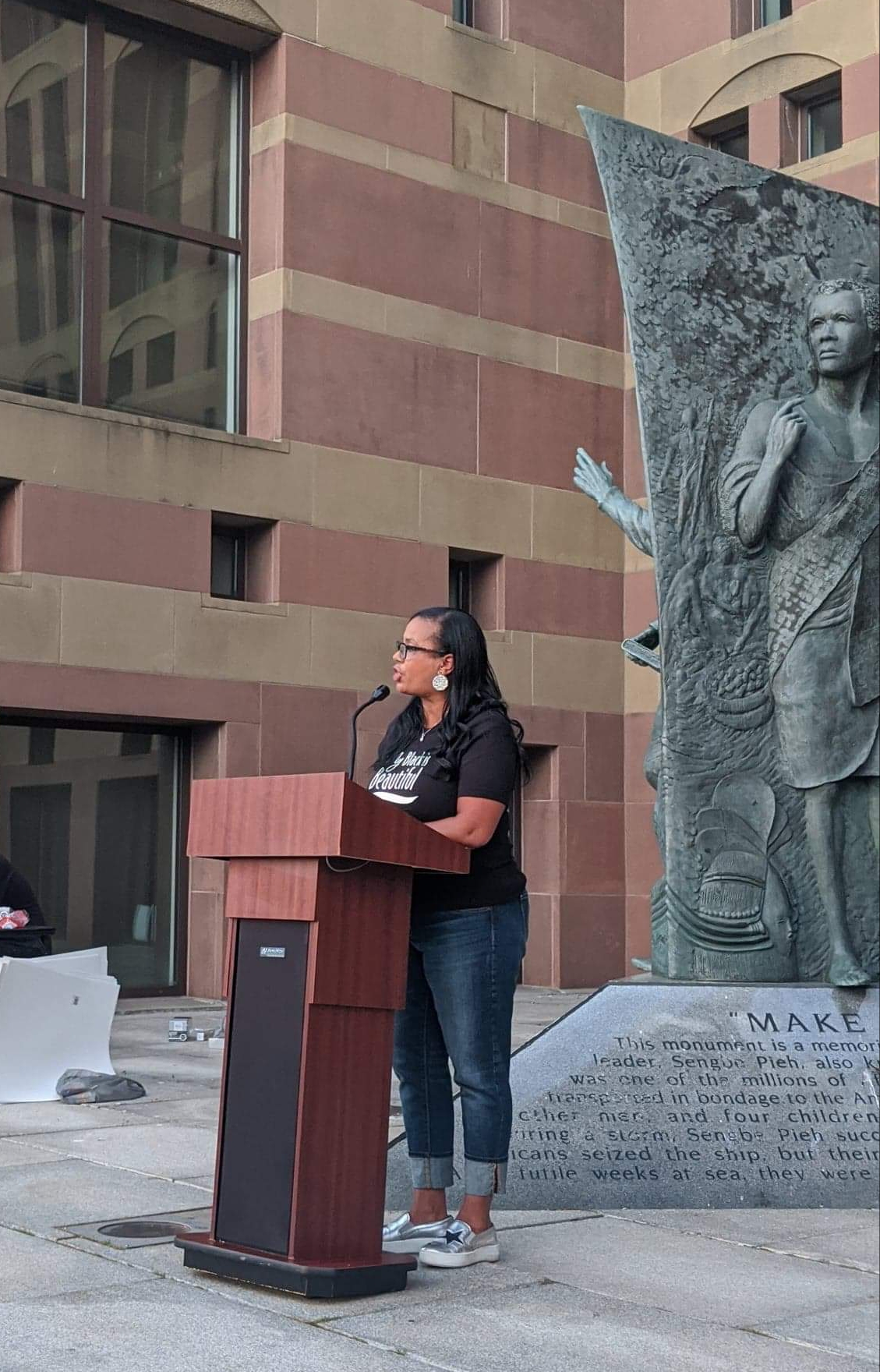 This article has been edited for this post. For the full article with pictures and video, please click here: