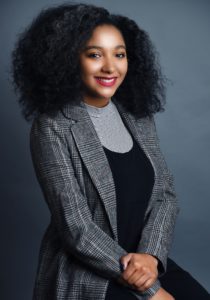 Antoinette Badillo was born in Bronx, New York.  She currently resides in Hamden, Connecticut. Antoinette earned a bachelor’s degree, cum laude, in social work from Southern Connecticut State University in 2015. It was there that she became an active member of Southern Connecticut State University’s National Association for the Advancement of Colored People College Chapter. During her undergraduate career, Antoinette dedicated and committed her time as an executive board member. Following her graduation, Antoinette continued her studies and obtained a master’s degree in social work from New York University in 2016. While studying, she maintained her involvement with the CT NAACP Youth and College by becoming a leader on a state level.  Antoinette served as third Vice-President for the Connecticut NAACP Youth & College State Division and then, she humbly accepted the role of President for the Connecticut NAACP Youth & College State Division in February 2017.

She maintained the role as President for two years and received the Connecticut NAACP State Conference President's Award for her outstanding commitment to excellence and the upliftment of ideals of the NAACP in 2018. Now, she is an active member of The Greater New Haven NAACP Branch. As of recently, Antoinette was accepted into the NAACP 2020 Next Generation (NEXTGEN) Young Professional Leadership Training Program.  Also, Antoinette is a school social worker for New Haven Public Schools. She is a freedom fighter, a leader, and a partner in the struggle, aiming to tackle injustices and demand quality civil rights for all people.